The psychoanalyst Jean Laplanche proposes the concept of the "enignmatic signifier:" the subtle, typically unconscious, powerfully conflictual messages communicated to the child by its mother, messages that the child must then struggle to translate in its own mind. In this talk I want to look at some of the not-so-enigmatic signifiers that proliferate in bureaucratic contexts, and ask about what sorts of unconscious dynamics may be at work there. 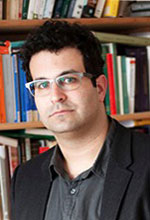 Ben Kafka is a professor in the Department of Media, Culture, and Communication at New York University and a psychoanalyst in private practice. He has been a Member of the School of Social Science of the Institute for Advanced Study in Princeton, a Visiting Fellow of the Internationales Kolleg für Kulturtechnikforschung und Medienphilosophie at Bauhaus-Universität Weimar, a Rita Frankiel Memorial Fellow of the Melanie Klein Trust, and, since 2007, a Fellow of the New York Institute for the Humanities. His first book, The Demon of Writing: Powers and Failures of Paperwork, was published by Zone Books in 2012; he is now working on a second book, The Grand Unified Theory of Unhappiness.

Place: KUA (room to be announced)