Internationalism in the Age of Nationalism

Glenda Sluga’s latest monograph traces ‘internationalism’ in its many shapes from before World War I, via the end of World War II, the global seventies and the post-Cold War nineties, to its decline after 9/11. Rather than being a fleeting and idealist notion, Sluga argues that internationalism was deeply entwined with nationalism, both shaping 20th century world politics in ways that echo into the 21st.

Internationalism in the Age of Nationalism

The twentieth century, a time of profound disillusionment with nationalism, was also the great age of internationalism. To the twenty-first-century historian, the period from the late nineteenth century until the end of the Cold War is distinctive for its nationalist preoccupations, while internationalism is often construed as the purview of ideologues and idealists, a remnant of Enlightenment-era narratives of the progress of humanity into a global community. Glenda Sluga argues to the contrary, that the concepts of nationalism and internationalism were very much entwined throughout the twentieth century and mutually shaped the attitudes toward interdependence and transnationalism that influence global politics in the present day.

Internationalism in the Age of Nationalism traces the arc of internationalism through its rise before World War I, its apogee at the end of World War II, its reprise in the global seventies and the post-Cold War nineties, and its decline after 9/11. […] In this retelling of the history of the twentieth century, conceptions of sovereignty, community, and identity were the objects of trade and reinvention among diverse intellectual and social communities, and internationalism was imagined as the means of national independence and national rights, as well as the antidote to nationalism.

The discussions are followed by a reception. 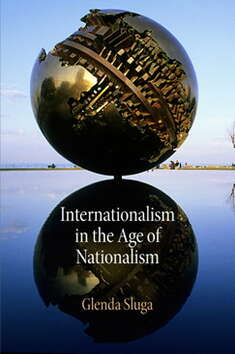