Roy Jenkins and the European Commission Presidency, 1976-1980.
At the Heart of Europe. 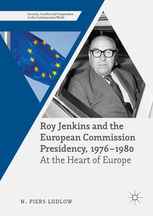 Roy Jenkins brought great talent to Europe’s top job. He played a key role in re-launching European monetary integration, winning the right to attend the new global summits, and smoothing Greece’s path to EC membership. But he fell short of other targets. Commission reform remained elusive, as did an improvement of the UK’s troubled relationship with the EC.  Indeed the row over Britain’s contribution to the EC budget, meant that Britain’s position in Europe was as difficult when he left Brussels as it had been when he arrived. This study will look at how Jenkins approached his role, identifying his priorities, examining his working methods, and exploring his rapport with the European and international statesmen with whom he had to work. In the process, the book will shed light on the nature of the job, on Jenkins’ own talents and limitations, and on the European Community as it struggled with the global economic crisis of the 1970s.
See also the Pelgrave website.

The lecture is part of the Author meets Critics series and is organized by Centre for Modern European Studies (CEMES) / the resarch group 'Rethinking European Integration'.

Piers Ludlow has taught European history at the London School of Economics, UK, since 1998. His research centres on the history of European integration – and on Britain’s difficulties with it.  Previous books include Dealing With Britain: the Six and the First UK Application to the EEC (1997) and The European Community and the Crises of the 1960s: Negotiating the Gaullist Challenge (2006).